Emergence of the Lion 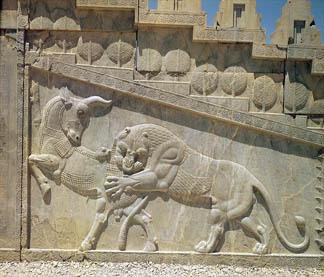 The archetype of the Lion has long been associated with the constellation of Leo in the Zodiac.  Throughout history, the lion has been correlated with the solar principle.  In the glyph above, it represents the beginning of spring as the constellations of Taurus, the bull is being slayed by the lion, in which the Sun emblematic of the planting season is conjunct Taurus in April/May (Persepolis, 500 BCE).  The Lion as an archetype is also symbolic of the ego, the ruler, and as the 5th sign of the zodiac, it is expression of existential wishes and desires.

In Bruno Huber’s developmental astrological  psychology, the movement of the AGE Point (AP) through the twelve astrological  signs represents psychological tasks as a person interacts with the environment.  The AP takes six years to traverse one house which is symbolic of the field of activity associated with the traditional astrological houses. 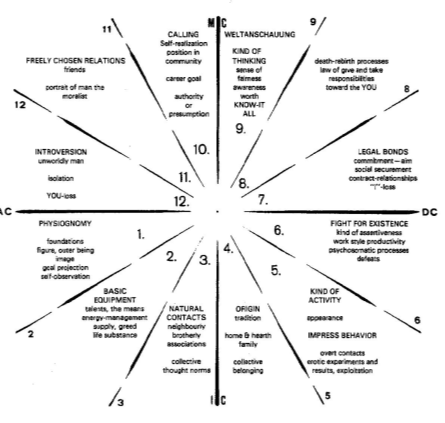 Bruno Huber identified psychological tasks within a 72 year life cycle as the AP traveled each house in the development of the individual. (Life Clock, Bruno and Louise Huber).  The psychological tasks correlate with Erickson’s eight stages of man roughly and signify crises: developing self worth (ages 6 to 12) ; leaving home ( ages 18 to 24); developing intimacy ( ages 24 to 30); finding a job ( ages 30 to 36); mid life crisis (ages 42 to 48); retirement (ages 60 to 66); introversion and loneliness (ages 66 to 72); and renewal of life on one’s own terms (72 to the end of life).

My task in correlating dreams with environmental events of the day demonstrates the dramas of life as dreamwork reveals the challenges to the ego of the individual when she meets certain environments signified by the 12 houses of the zodiac.  (Life Passages, when Age Point Aspects and Dreams Coincide, Grove, 2017).

In 2017 I published Life Passages I was aware my AP was in the 12th house and I was in a period of life in which I  having an inner journey.  I was 68 years old and in the life phase of introversion  and loneliness according to Huber.  I faced health crises and a form of isolation being semi-retired from active life.  At about that time I dreamed of a lion going to open a basement door and entering into the cellar.  It was symbolic of my increasing egoic isolation and was predicted as an opportunity to have a 12th house experience. 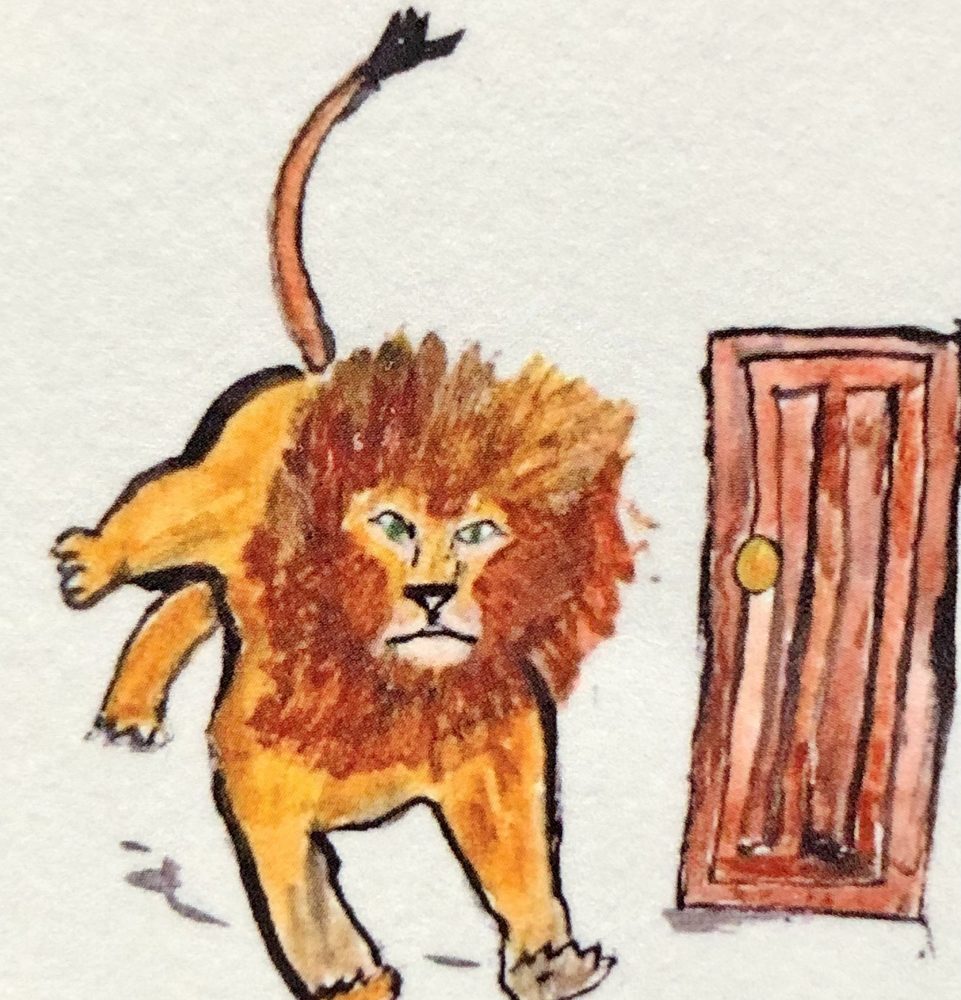 During the year 2021, I had my 72nd birthday in January.  On April 10th I had the following dream:  I was in a room having a conference.  There were many people there.  The leader, a woman, asked the group members if they had an opinion about whether to stay in the room or go outside ( in spite of an objective danger).  She asked several people and one woman said, “No!” She would stay in the room.  It was a situation in which one intuitively knew that to stay in was the wrong answer.  She came around to me and I responded, “Yes, go out”!

As I walked out of the conference room, I crossed a platform in which beneath me was an adult male lion.  t was not secured, just resting below the platform.  i could sense its warm, humid breath.  As I continued to walk out, the beast also left its resting place and went into the light of day.  People scattered as it came out.  It followed a man as he fled but came back to where I was hiding behind a corner of a building.  As the lion approached me, I walked briskly to a set of glass sliding doors.  I entered the building and closed the doors.  As I peered out I could see the lion trying to engage me but it could not.  I was safe, alone but others were not. 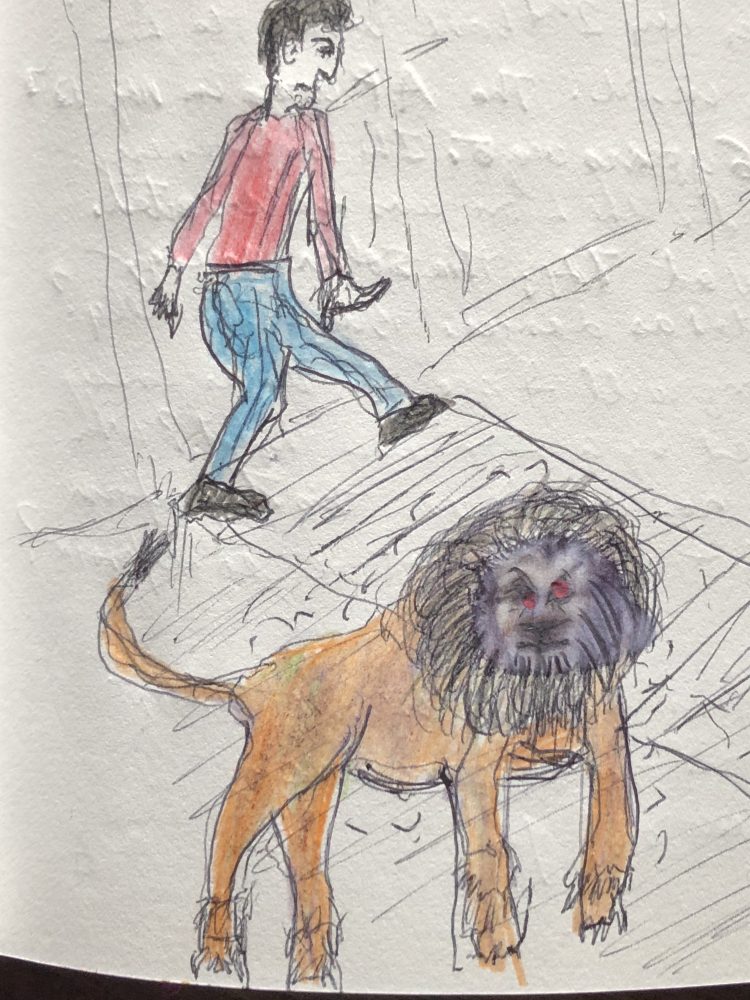 The woman leader was an Anima figure.  Anima figures according to Jung, represent the feminine aspect of the male’s unconscious.  These figures can develop as a man matures from mere sexual figures to female guides.  Anima figures have the effect of motivating a man to action, as he integrates his feminine side into his conscious awareness.  The anima can stimulate a man’s growth and development leading to reconciliation of opposite tendencies in his psyche  and individuation.  The role of this anima figure in my dream motivates me to “go out”!

The adult male lion represented my identification with the power of my ego which was suppressed by my introverted period whcn the AP was in my 12th house.  In the dream I was fearful of the integration of my ego with action in the outer world at the time I had this dream.  I was still immersed in a introverted period and this was reinforced by a world wide pandemic.  My inability to identify with the lion was an indication of my ego being ambivalent. The resolution of the dream was that the lion was a bridge between inner and outer world experiences.  And now I had to move out and re-engage my ego in a new way.   I was challenged to switch from engaging in a cautious enterprise to a heroic action in the outer world again.  This was the lion representing my confident and secure sub-personality actively engaged in the outer world again.  Not with the reckless abandonment of youth but with a mature renewal of confidence supported by experience.

This dream is a form of transpersonal inspiration.  The dream symbols are woman leader= Anima; Lion= my egoic persona. Dr. Roberto Assagioli in his psychosynthesis approach to growth, recognised that dream themes were useful indispensable ways to catch and illuminate a transcendental reality from a super-conscious realm.  The woman leader often appears in my dreams as a guide as she comes through via of the CORE in Huber’s graphic:

The anima figure resolved my inner conflict about “going out vs. staying in”.  The dream illustrates the conflict very succinctly.

My AP is conjunct the cardinal zone of my 1st house meaning a reformation of the “I”.  It is a time for me of reaction to outside stimulation as i re-engage in accelerated activity with the environment.  And this action is fulfilling bz a successful achievement of visiting family in Italy during a pandemic.