Dreams lead a person out of a neurotic conflict by the process of individuation.   “Health and individuation, however are not always aligned; what is healthy for one dominant ego-image at a particular stage of life may be decidedly unhealthy for the nascent ego-image in the next stage of life.” (Hall, p. 28), For example, if an individual is facing the issue of leaving home and becoming more independent from her family vs. staying home and not venturing out.   It causes anxiety to accomplish this because it could fail.  This is an example of a developmental task that reveals a psychological conflict- stay or leave home

The process of individuation which is driving subliminally the process, is the ‘enemy’ of what the person wants which is to stay at home and not face the anxiety of being on one’s own. “Individuation is a larger and more complex concept than ‘health’.  It is a dynamic process; it involves constant change and eventually leads to an acceptance of the finitude of life and the inevitability of death.” (Hall, IBID.)

Ego choices which are seemingly conscious, willful acts are often not the cause of identity changes at the more profound levels of psychological conflict.  And the necessary choices that an individual makes are not within the sphere of conscious ego choice but are motivated from deep within the psyche.  “The transcendent function which is the symbol -making capacity of the psyche, is able to alter the conflict of opposites through the creation of a symbolic solution that relativizes both warring opposites in a wider frame of meaning. (Hall, IBID, p. 29)

The transcendent function is the reconciling “third” function in the personality and individuation’s tool.   This third function is driven by the unconscious need for wholeness and the psyche’s need for solving polarities within the psyche and ego identity of individual. “It emerges from the unconscious in the form of a symbol or new attitude after the conflicting opposites have been consciously differentiated, and the tension between them held.” (Hall Ibid p. 121)

The transformation of the psyche which occurs in the resolution of neurotic conflict in our example of leaving home, is not under the control of the client’s will and so advice coming from a well-meaning therapist or coach to guide a person to leave home is a superficial and surface way to solve psychic blocks and does not work.  The individual has to wait with the therapist until the old ego image ‘dies’ first, before one can make way for the new attitude allowing the psychic energy and freedom to break free from the ego attachments of the parents, home and family in order to leave home.

The dominant identity of the client which the ego chooses for an ego image, may be altered.  But it depends on the which complex (or combination of complexes) the ego uses for its main identity.  “A complex structure that is attached to the ego-identity is often bipolar and has two identity patterns (or complexes) which are arranged in a particular way.  One pole is often assigned to the ego as a pattern of identity, and the coordinated opposite pole is either repressed into the shadow or is projected onto a person in the environment, usually a close family member. “(Ibid Hall p. 31).

Shadow is defined as an unconscious part of the personality characterized by traits and attitudes, whether negative or positive, which the conscious ego tends to reject of ignore. It is personified in dreams by persons of the same sex as the dreamer.  Consciously assimilating one’s shadow usually results in an increase in energy.  (Hall, pg. 121). 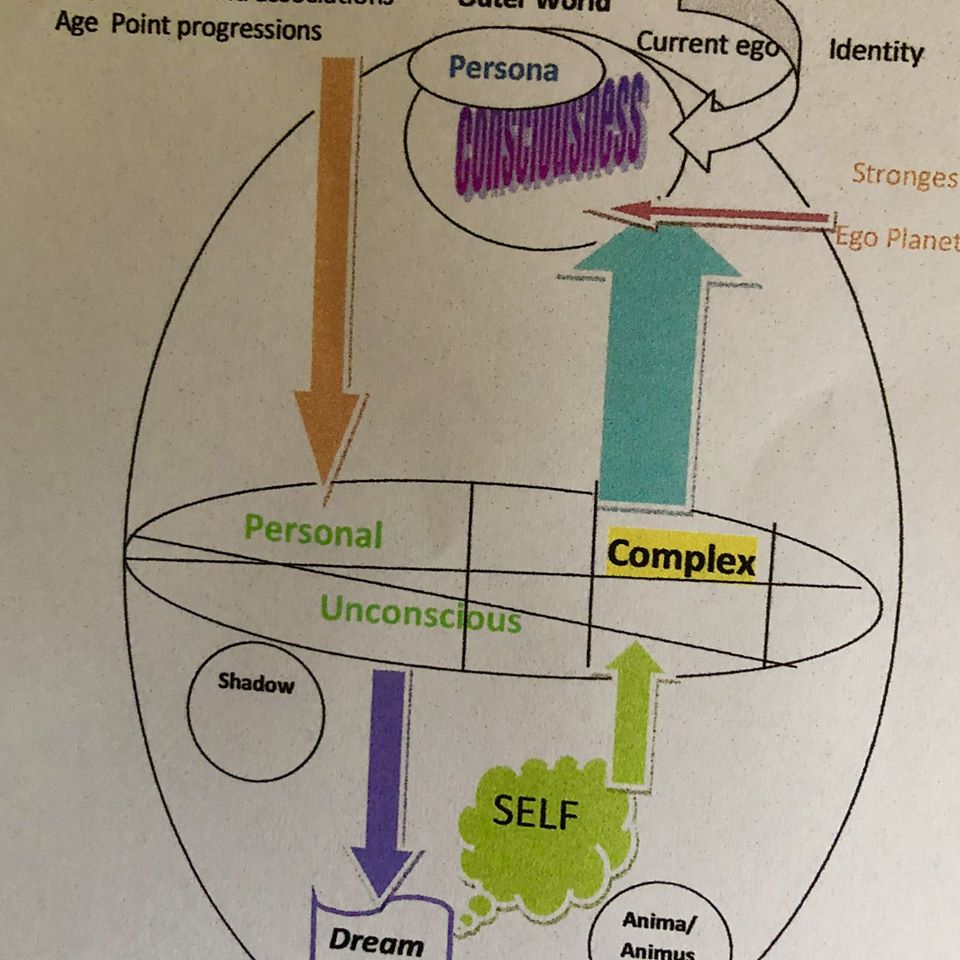 I want to explain how dreams actively and passively stimulate complexes in the personal unconscious of an individual. A complex is an emotionally charged group of opposite affects taking on a bipolar quality in the psyche- one part attached to the ego identity and the other repressed in the personal unconscious.  The complex at the center of the personal unconscious has images which contain psychological opposites; For example, masculine and feminine; strong and weak; dominant and submissive.  Dream images improve or worsen the identity pattern of a person making the dreamer identify with one of the emotional parts of the complex over the other. Usually what occurs at first is ego identification with the emotion triggered from the day’s events and associations in the outer world; and when the opposite emotion that is evoked by the dream images is made conscious; it neutralizes the emotional valence of the original affect.  For example, let’s say I am about to retire from my job.  I worry that I will not make enough money to survive existing just on social security.  My ego identity is concerned with the facts of my life in the outer world, i.e., retirement. But then I have a dream that I am at a store getting ready to buy provisions for a mountain trip.  I worry that I don’t have enough money to pay for all that I need for the trip.  I wait in line and realize as I am about to check out, that I have already paid for the stuff so my anxiety dissipates.

In Astrological Psychology, the Age Point progression identifies conscious developmental tasks or conflicts that occur in the life cycle.  Because these occur in the daily life of the individual, she is conscious of these problems.  Age Point aspects and transits amplify this conflict by oppositions and squares to the sensitive points of the horoscope. These angular relationships reflect the developmental conflict of opposing emotions and Age Point Progression.  In turn, a dream is created by the Self to heal the split caused by the emotional conflict and produces a dream image opposite to the outer situation.  This is how categories of dreams are produced which heal neurotic spits in the psyche and guide the individual to higher levels of developmental achievement in the life cycle.

Through the transcendent function which is tool of the individuation process we are guided, if we are aware of our dreams and out conflicts, to becoming more whole.  By neutralizing the conflicts, the psyche acts on our personality and changes our ego identity by creating a new attitude toward the problem.  This is why I promote dream interpretation because you can become aware of this process of healing, have faith in it and learn to wait for it to reduce psychological suffering.